skip to main | skip to sidebar

Good Afternoon all. Seems an age since I was last here.   What have I been up to, not too much really just been really tired after work.  Oh I came home from work on Thursday to no electricity, it was pitch black so had to find torches and candles with just the light from my phone.  All the neighbours seemed to have their electricity so thought it was just us.  Then next door neighbour came around to say theirs had gone off too.  Apparently it went off at 10.30 Thursday morning, my neighbour called the electricity board and they provided them with a generator but couldn't do anything until we were home.  We phoned and they brought us a generator too.  Then they had to come back Friday to repair the fault which was in my neighbours garden.  Had to ask my dear dad to come and sit in while it was fixed so he arrived at 7.30am Friday morning.  Would you believe they were still here when I got home from work at 5.30.  A second team turned up and worked right through until 11.05pm when finally we got electric back, 37 hours !!.  You should see the state of next doors garden, well its just a hole!!  Still waiting for a different team to come and fill it in again. 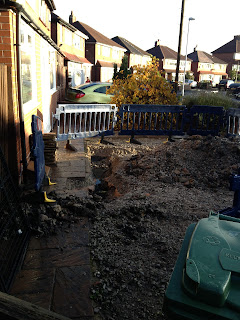 Anyway enough of my blethering.  I am going to a retirement party on Saturday for one of the GPs at work.  So I have made this card for him. 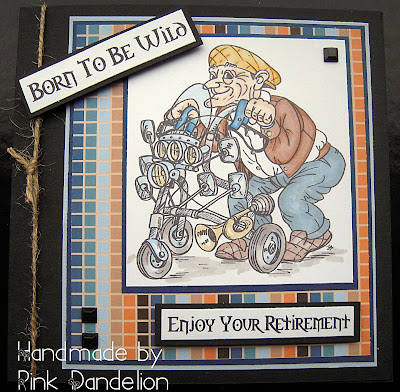 Oh Debs, That sounds like eveyones nightmare glad that its sorted now though and a long time for your dad to be there too! brilliant card just lovely this image its gorgeous x

Your card is fab Debs, the image is brilliant!!

I bet you were glad once you finally got your electricity back!

Sounds like you've had a right old nightmare!! Glad you've got power now!
Brilliant card. i love the image and the colours look great too.
Lorraine x

Hi Debs, oh my word that sounds like a total nightmare with the electricity!!

Your poor neighbours' garden - hope they are going to re-instate it.

On a more cheerful note! Wonderful card you've made there - such a fun image! Fab masculine card.

PS - Hope you and hubby come to agreement with your renovations - took me quite awhile to get up the courage to explain my plans to 'im indoors. He's not keen on big ideas, thought he'd got to the end of major house changes!!

Pink Dandelion
Greater Manchester, United Kingdom
Hi my name is Deb. I am married to Chris and have two grown up children, Stewart and Emily. I am the secretary in a large GP surgery in Greater Manchester.

Proud to have been a Design Team Member for:

Sorry, I really appreciate the thought but don't have the time to pass them on.

My Gallery on Docrafts