skip to main | skip to sidebar

Hope you are enjoying the jubilee weekend. We haven't really done much. We went to Hardwick Hall on Sunday where there was supposed to be a 1950s style street party but that was a bit of a washout so we just had a mooch around the hall and then left to go see Emily in Lincoln. She is coming home from uni next week so as we were only 45 mins away we thought we would go see her and bring some of her stuff back so there wouldn't be as much to carry next week. We went for a lovely meal and it was so nice to see her and catch up.

Yesterday we just did a bit of shopping and tidying up.  Today Chris is out in the garden.  He is making a new bed at the end of the garden where hopefully we are going to grow some fruit and veg.

I thought as I had a couple of hours to spare before the French Open, mens quarter finals start I would get another Christmas card made to add to my collection 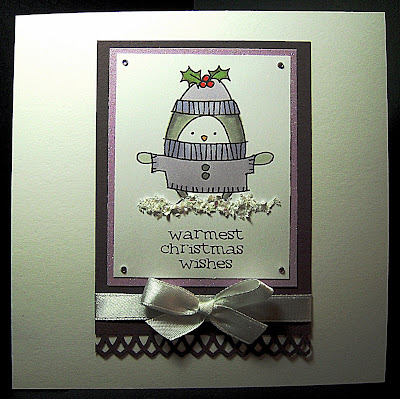 Top Tip - When cutting the glitter card, put your double sided tape on the back first so the glitter doesn't flake off and leave a white edge.

Hi Debs
Your card is gorgeous, I love the penguin and the layout is fabulous. Thanks for the tip about cutting glittery card, will give that a go.

Enjoy the rest of the day
Sue

Super positioning of the ribbon with the image & nicely CAS without being too stark.
Glad you've had a good Jubilee Break even if the party didn't go to plan.
Paula (PEP)

your card is very cute!!
Thanks for playing along this week with us at CSAYL

fabulously prickly holly and a gorgeous creation, thank you for joining us at the Winter Wonderland
Hugs Kate xx

This is absolutely darling!!!! LOVE your penguin--and the snow is amazing! I hope you have time to join us this week at 52 {Christmas} Card Throwdown!!! :)

This is absolutely darling!!!! LOVE your penguin--and the snow is amazing! I hope you have time to join us this week at 52 {Christmas} Card Throwdown!!! :)

How super cute is this image and love the snow under his feet.
Thanks for sharing @ ABC Christmas Challenge.
Hugs Sue W GDT.

Pity about your street party everything was a bit of a washout here too! Fun little card with a super cute image Deb hugs Rebekah xx

This is super duper cute!!! Great CAS layout too. I am sensing a trend with all this purple - I need to give it a go :>)
Thanks for joining us at CSAYL this week!!!

I've enlarged the image and there's sparkles EVERYWHERE. So perfect for our challenge and for a winter wonderland Christmas card. Adorable card. :)

Thank you so much for playing along with us at Top Tip Tuesday!
Remember you can enter up to 3 projects and 3 tips.
Have a great one!
Lisa xx

Gorgeous card. That image is really cute and I love the colours you've used.

Delightful card - love the touches of purple - thanks for joining in my CHNC challenge 75 - hope to see you again soon. x

Brilliant card Debs LOVE the Design and Layout a Lovely C&S card and also a Great Top Tip too!

Great to see you at ABC Christmas challenge and AWESOME you could join Top Tip Tuesday too!

Aww :) This made me smile! I get like that when I am wrapped up in woolies! lol.

You did a great job in this card.
Thank you for joining us at CSAYL.
Hugs
Dörte

What a gorgeous card - Love that image and your sparkles!

Great Top Tip too, thanks for sharing.
Thanks for joining us over at Top Tip Tuesday for our 'Sparkles Galore' challenge :)

Great Christmas card, such a cute image. What a great tip for cutting your sparkle paper. Thanks for joining the Sparkles Galore Challenge at Top Tip Tuesday.

This is such a wonderful christmas card. Love the CAS design and how you've coloured that fab image. Thanks for playing at ABC Christmas Challenge and Top Tip Tuesday and good luck. Hope to see you back wednesday and tuesday for new challenges. Bettina xx

Too cute! that little penguin looks so warm in his winter woolies. Thanks for playing at ABC Christmas.
Carissa :)

Pink Dandelion
Greater Manchester, United Kingdom
Hi my name is Deb. I am married to Chris and have two grown up children, Stewart and Emily. I am the secretary in a large GP surgery in Greater Manchester.

Proud to have been a Design Team Member for:

Sorry, I really appreciate the thought but don't have the time to pass them on.

My Gallery on Docrafts